A PERSONAL HISTORY OF MALBOROUGH BAPTIST CHURCH
by Marjorie Hallworth

My earliest memory of our church was going to morning worship with my Grandfather Luckham and sitting in the third seat from the front on the organ side. Then Grandfather would take off my bonnet and we would settle quietly waiting for the service to begin. The part of the service I liked the best was the sermon, for Grandfather would put his arm around me, and I would snuggle up to him and go to sleep.

Two important features of our young lives were the Band of Hope and the Sunday School. The Band of Hope occupied quite a bit of our time.  At the age of five years, with the help of Miss Boyce who was the Band of Hope secretary,  I signed the pledge.  I was fully aware of what signing the pledge meant, and I may add that I have kept that pledge through all these years. 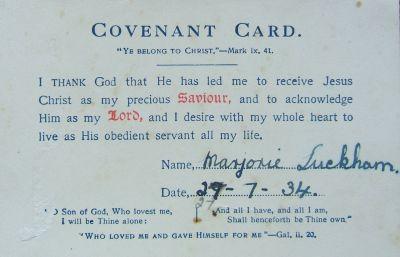 Having signed the pledge I was entitled to go to the Annual Band of Hope tea which was held in November. This was a special occasion and well attended.  Three of my cousins used to travel from Didcot each year, which helped to swell the numbers.

The ordinary meetings were held monthly and we children were expected to sing a song or recite a piece of verse which had been chosen and given to us at our weekly practices by Edna and May Keast.  During the winter months my brothers and I went to these practices by the light of a storm lantern, carried by my elder brother.  There were no street lights in the village then.

My earliest recollection of Sunday School is of singing with the other children, 'Hear the pennies dropping, listen while they fall: everyone for Jesus, He shall have them all.'

The Sunday School 'treat' to Thurlestone was special.  We went in wagons loaned by the farmers, but before we set out all assembled at the church and sang, "Jesus shall reign,"  after which the Superintendent would pray, what seemed to us, an interminably long prayer. 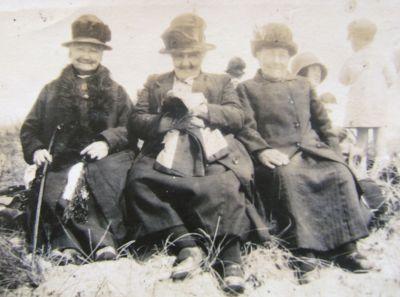 In addition to this I remember my Sunday School class being taken by our teachers, Edna and May Keast to Soar Mill.  It was a lovely afternoon and we had a feast of apple pasties and cream;  who made all I couldn't say, but they were delicious.

The other big event was out Christmas Party.  On that day we assembled in the church and each scholar received a prize.  Then we all went into the bottom school room for the party.  The Christmas tree was loaded with presents and a sight to behold!!  There was tea and parlour games and the distribution of the presents from the Christmas tree.  One memorable year I had occasion to 'go outside.'  It was dark and walked into the tombstone situated opposite the church door.  I bumped my head and made it bleed so I ran off to my Grandmother in the Lower Town who washed and patched up my forehead and I soon rejoined the party none the worse for the bump.  I often recall this when I see that gravestone of Richard Ford.

Another headstone that brings back memories is that of Rev. Crossman, barely legible now, but it was when I was a small child.  The epitaph was 'A shock of corn fully ripe.'  I knew all about  sheaves of corn but nothing of a 'shock of corn.'  I imagined that Rev. Crossman had died of shock because the harvest had been particularly early that year!!  I was a good bit older when the real meaning of the inscription dawned on me (a shock is a sheave!)

Out church secretary,  Mr.Smale, who lived at Lower Soar, used to travel to church by pony & trap, and the pony was stabled under the church in what is now the church storeroom.  At times during the services the pony would stamp and snort, all plainly heard by the congregation.  We also had pigeons in the loft above the gallery.

For many years my mother was the church caretaker. When I was considered of age I had to help with the dusting,  but I was never allowed to dust downstairs, only the gallery, with the instructions, 'don't forget the ledges.'

In the early days there was no piped water in the church and when my mother needed water for cleaning, she would role back the matting from the vestry door, open the hatch into the baptistery, go down a couple of steps and dip her bucket in.  The opening looked black and forbidding and quite terrified me.  I believe that the baptistery was fed rain water in some way.  Perhaps someone with a longer memory than mine can explain how this happened?

Earlier I mentioned Edna and May who were my Sunday School teachers.  I would like to record here that their efforts were not in vain, but bore fruit on a June Sunday evening in 1935, when I was baptised as a witness to my acceptance of Christ as my Lord and Saviour.

As a family our lives revolved around the church, as did the lives of many of our people.

The war came.  I left the village and except for home visits I was away many years, but the church has a very special place in my heart.  I am glad that along with my husband Arthur* I am 'at home' again.